Fota Wildlife Park, which re-opened its gates on the 20th May after an eight-week closure due to the Covid 19 restrictions, today announced the birth of three Northern cheetah cubs (Acinonyx j. soemmeringii) to mother Gráinne and father Sam. Now exactly 12 weeks old the three cubs, all males, were born on St Patrick’s Day, March 17th, 2020 and they bring the number of cheetahs born at Fota Wildlife Park to over 230 since the breeding programme began in 1985. As yet the cubs are unnamed and Fota are today calling on the public to suggest the names at www.fotawildlife.ie/blog - and be in with a chance to win one of three year-long annual passes. Cheetahs are listed globally as Vulnerable by the International Union for the Conservation of Nature (IUCN) Red List of Threatened Species and there are only 7,100 remaining in the wild. However, the Northern cheetah subspecies is considered Endangered as there are less than 800 left in the wild. Fota Wildlife Park coordinates the European Breeding and management programmes for the Northern cheetah and there are currently 129 Northern cheetahs in 23 Zoological institutions throughout Europe and the Middle East.
Fota Wildlife Park, who are now operating a pre-booking on-line system to comply with social distancing requirements, is a not for profit conservation organisation. The Park lost over €1.2 million in income during the Covid closure and faced a monthly bill of over €30,000 in feeding costs alone.
Director Sean McKeown said today: “We are delighted to announce the birth of these cheetah cubs today and we are also very happy to report that public and visitor feedback since re-opening has been very positive. Of course, public health, safety and adhering to the Covid-19 prevention advice is paramount here, therefore it is great to hear the positive feedback from the public.” He continued: “An important part of our mission is to operate breeding programmes for endangered species worldwide. Some of the world’s most endangered species reside here such as the Indian rhino, Asian lion and Sumatran tiger who are all participating in the European Association of Zoos and Aquaria (EAZA) run species management programmes. Gate receipts, entry tickets and membership sales provide the vast portion of our income which allows us to continue our conservation work and education programmes on the need to conserve our global biodiversity.”
In total four cubs were born on St. Patrick’s Day however one cub did not survive after living for only four days. New mother Gráinne was born in Fota on 29th May 2017 and father, Sam was born on 26th Dec 2015 at Wadi al Safa Wildlife Centre in Dubai, UAE, and transferred to Fota on 14th June 2017. Gráinne is fourth generation captive born, and this is her first litter, and this is Sam’s third litter of cubs and the cubs are the first fifth generation of Northern cheetah born in a zoological institution.
Not only is the Cheetah the fastest land animal in the world today, the species has been in existence for between 3.5 and four million years - making it the oldest of Earth’s big cat living species. The Cheetah had one of the most extensive distributions of any living carnivore, ranging throughout Africa and Asia and  it is estimated that in 1900 there were more than 100,000 cheetahs throughout Africa and Asia but by 1975 this number had decreased to less than 20,000. Today there are less than 7,000  wild cheetah that are now mainly confined to Southern Africa with small numbers in East and North Africa and a tiny population of 30 cheetah in Iran.
Slender bodies, long legs and a flexible spine help the Cheetah achieve speeds in excess of 100kph in pursuit of its prey, with its tail acting as a finely tuned balancing aid. It also has semi-retractable claws and cannot roar like other big cats.
To pre-book your time slot to visit the three Northern cheetah cubs - please visit Fota’s booking site https://www.fotawildlife.ie/blog/reserve-your-time-slot-know-before-you-visit/. Fota Wildlife Park is open daily from 9am to last entry 4.30pm. www.fotawildlife.ie 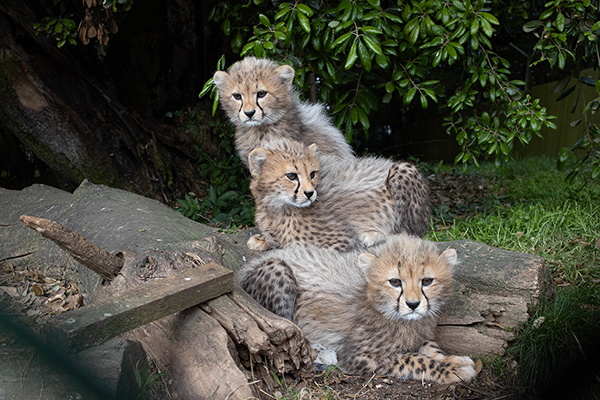